West Ham are being linked with a new goalkeeper name, per a report in Italy.

We have reported previously that David Moyes has yet to make a decision on whether to keep Alphonse Areola at the club or pursue a new goalkeeper in the summer. 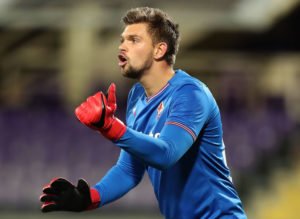 The Hammers are keeping close tabs on Everton’s Jordan Pickford in case the Toffees are relegated, while Nick Pope and Dean Henderson, of Burnley and Manchester United respectively, have both been linked with the Irons.

Now, it appears that the Hammers are also eyeing a potential deal for Fiorentina stopper Bartlomiej Dragowski, per Corriere Fiorentino.

The 24-year-old has a contract that expires in 2023, meaning that he may be available for a knock-down fee in the summer.

Dragowski has won one cap for Poland but has struggled somewhat with injury this season, limiting him to just seven Serie A appearances, although he has kept three clean sheets in that time.