Posted by Sean Whetstone on July 6, 2019 in News, Whispers 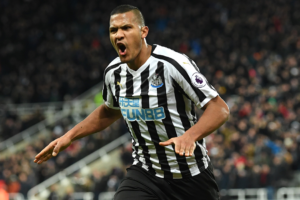 Rondon scored 12 times for Benitez at Newcastle United last season during a successful loan spell from West Brom – and now the Spaniard is seeking to take him to new club Dalian Yifang. Championship side Albion can’t afford to keep 29-year-old Rondon and are willing to strike a deal with Dalian whose financial power gives them an advantage.

Slaven Bilic is reported to have little interest in either West Ham player and insisting on the full £16.5m release clause for the Venezuelan striker.

The 29-year-old would receive massive wages in China like Marko Arnautovic and that could be a deciding factor for him along with the reunion of his former manager.

← Player power? Just this once I love it
Agent Barnett calling Irons shots on Gomez deal →
Click Here for Comments >

7 comments on “Report: Benitez to lure Rondon to China”