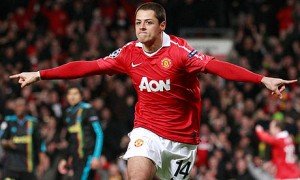 West Ham and Spurs are claimed to be holding a keen interest in Javier Hernandez according to  German newspaper Bild.

The former Manchester United hitman is out of contract with Bayer Leverkusen hitman next summer and it is claimed the club could entertain offers for the 29-year-old.

The newspaper adds that he could even be made available for as little as £13 million.

The Hammers first showed an interest in the Mexican back in the summer of 2015 before he decided to move to his present club.

He netted 11 goals in 20 Bundesliga starts last season and earlier reports in Bild claimed he was an unpopular figure in the Leverkusen dressing room with his lack of contribution to general play and an unfriendliness with team-mates said to be the reasons.

However, later he claimed to be entirely at ease  at the club telling bundesliga.com ‘Why would I like to stay in the Bundesliga? Because I feel good and I’m happy.’

9 comments on “Report: Hammers and Spurs interested in Hernandez”