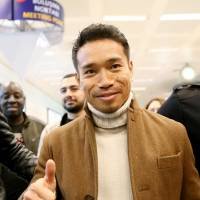 The 31-year-old Japanese who joined Inter from Cesena in January 2011 has hopes of getting in games prior to this summer’s World Cup in Russia. The former FC Tokyo player, who has 101 caps for Japan, has appeared in just one of Inter’s last 10 league games before moving to Turkey on a six month loan.

According to several media outlets, Inter coach Luciano Spalletti Nagatomo asked for more game time as he tries to maintain his spot on the national squad ahead of the World Cup. Earlier in January while in Japan during the Italian league’s winter break, Nagatomo said, “I feel a sense of urgency.It’s not like I’ve been selected already.”

Nagatomo’s contract with Inter runs through June 2019. According to FC Inter News West Ham and Watford are showing possible interest. The website claims that both Premier League clubs have already requested information about his availability in the summer. He is currently on loan to Galatasaray who have an option to buy.