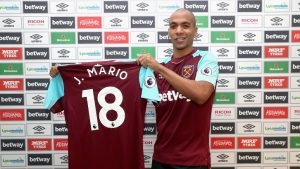 Inter Milan have rejected an initial bid of 13.7 million Euros from West Ham for Joao Mario according to reports in the Italian media.

Website FCInterNews.It claims the Hammers paid a loan fee € 1.2 million to keep Mario until the 30th June this year but since made an offer of 12 million pounds to make the deal permanent. The report says the bid was rejected by Inter Milan as it was considered too low.

The former Sporting Lisbon player was signed for almost four times as much at €45m including add-ons in the summer of 2016, after he had helped his country win the 2016 European Championship.

The 25-year-old has all but ruled out a return to Inter in the summer.

“I’m happy with my new adventure and I hope to finish the season well. Inter are part of my past now. I could have played more, but football is about that too. Now I’m happy and that’s what matters most.”

One comment on “Report: Inter reject bid from West Ham”