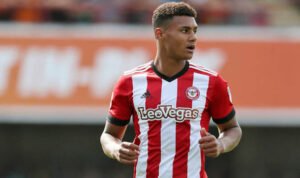 Aston Villa boss Dean Smith as being reported as wanting to launch a bid for his former Brentford striker Ollie Watkins.

The 24 years old was believed to have been a Hammers target earlier in the summer after the Bees failed to make the Premier League via the Championship play-off final.

The new report comes via The Sun and contains no real firm detail beyond the fact that the 24 year  old once played for Smith, so at this stage it’s probably best to remain cautious in what we believe.

It’s an easy link to make but we understand that Fulham too are interested whilst the Hammers boss David Moyes is now continuing to look for defenders.

The current plan is that the Hammers will use both Mikey Antonio and Seb Haller as their central strikers and use Andriy Yarmolenko in the role should injuries intervene.

The Hammers boss is an admirer of the Brentford hotshot but Moyes is determined to beef up at the back before looking to reinforce at the front.

← Fingers crossed for Irons on international duty
Poll: Should we start the season with the currrent squad? →
Click Here for Comments >

10 comments on “Report: Villa set to swoop for Hammers ‘target’”