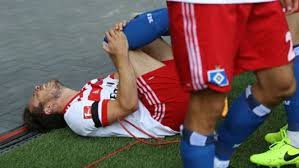 West Ham is reportedly free to talk to Nicolai Muller over a free transfer in the Summer which could see the winger see sign a pre-contract with the Hammers. German media suggests the Hammers have been given permission from Hamburg to speak to the 30-year-old who is out of contract with the German club this June.

The Hamburg winger was ruled out injured for seven months after rupturing his anterior cruciate ligament celebrating a goal last August. Müller netted the only goal of a game in Hamburg’s 1-0 win over Augsburg last Summer but joy quickly turned to agony as he fell to the ground clutching his knee after his celebration imitating a helicopter.

The winger has just resumed light training at Hamburg as part of his rehabilitation from his severe injury.