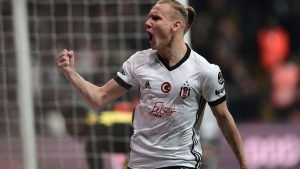 Besiktas president Fikret Orman is looking to get at least €15m for the player and he’s happy to wait until after the end of the World Cup as he’s hoping Vida’s impressive form could increase his value.

The central defender joined Besiktas on a free transfer from Dynamo Kyiv in January, but struggled to cement place in the Turkish side’s starting eleven. It’s reported that the highest bid received by Besiktas so far is €13m plus €2m add-ons is from Everton. Multiple reports claim that Everton, Fulham and West Ham all hold an interest the centre back.

The Croatian defender played over 40 league games for Dinamo Zagreb ahead of a move to Dynamo Kiev in 2013, and was very impressive during his five and a half seasons in Ukraine.

Pellegrini is looking for a second centre-back after the signing of  Issa Diop, Alfie Mawson was considered to a front-runner but that now looks ‘unlikely’ Marlon Santos was another name which has now fallen by the wayside. Chris Smalling is another name liked by Pellegrini in the centre back position.

← Club to consult on future of Memorial Garden
Report: Sullivan to step in over Stadium →
Click Here for Comments >