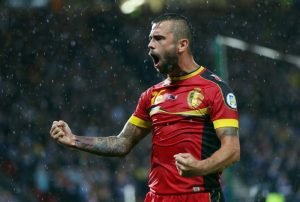 According to Belgian paper Nieuwsblad, West Ham are planning a move to sign Burnley midfielder Steven Defour in the Summer, with the 29-year-old also on the radar of Premier League rivals Everton.

Defour, who cost Burnley a club-record £8 million in 2016, has not featured for the Clarets since January due to a serious knee injury but he was one of their best players before that setback.

Defour looks almost certain to miss the World Cup but the midfielder is said to be in ‘good spirits’ over his recovery from knee surgery.

Defour told reporters of his World Cup chances “If I’m really optimistic, I would say 5% of chances. It’s like that, I can not do anything about it,  “he explains. ”  I want to play football as long as possible, so I do not want to take any risk, especially in relation to my health . I think Belgium can go to the semi-finals of the World Cup .”