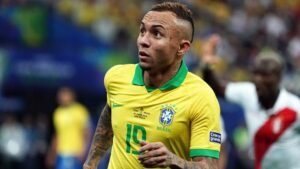 West Ham are interested in signing Everton Soares and will meet with the Brazilian striker’s agent next week claims Nicolo Schira.

On Saturday the Italian journalist told his Twitter followers that West Ham are keen to bring in Gremio forward Soares and will hold talks with his agent next week.

The Italian journalist was first to break the news on West Ham’s interest in Felipe Anderson and again with interest in Sebastian Haller so has some form on getting some of this rumours right.

Soares was arguably Brazil’s star man as they won the Copa America in the summer with a couple of rasping, long-range drives firing Tite’s side to glory. Everton has also enjoyed great form for his club too, scoring 15 goals and  making seven assists in all competitions this season for Gremio.

The 23 year old was handed his first professional contract at Gremio in 2013 and has gone on to make 252 appearances for the club, scoring 65 goals.

With a £30 million valuation this rumour sounds a bit too good to sound true especially with doubts on Mario Husillos’s role at the club over the winter.