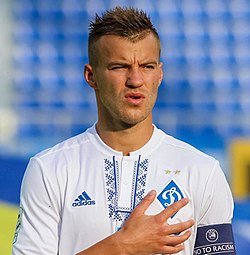 According to Ukrainian news outlet Zbirna, Andriy Yarmolenko has completed his medical ahead of his £17.6m transfer from Borussia Dortmund to West Ham.

Yesterday reports from Ukraine said he was already in London last night after given permission from his German club to speak to West Ham.  Dortmund sporting director Michael Zorc has told German newspaper Ruhr Nachrichten over the weekend that Yarmolenko could leave the club and that the BVB are in negotiations with another club widely reported to be West Ham.

The 28-year-old only joined Dortmund from Dynamo Kiev last August for £22m, but he has struggled to find his best form in Germany, netting just six goals in 26 appearances. The Ukraine international was a prolific scorer in Kiev, scoring 137 goals in 341 matches.