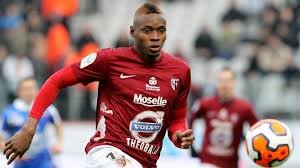 West Ham finally brought the Diafra Sakho saga to a conclusion when signing the player a few minutes ago on a four year deal.

The Senegal forward scored 20 goals for Metz last season to help his side secure promotion to Ligue 1.

The  move to the Premier League seemed in doubt earlier in the week when Metz claimed West Ham had tried to change the terms of the deal and bring him to Upton Park on a season-long loan.

But as ClaretandHugh revealed earlier today it was set to be resurrected and fresh talks brought  an end to the saga and the 24-year-old was presented as a Hammers player.

The player said: “This is a proud day to have signed for West Ham, I really love English football and I’ve dreamed of coming to play for one of the big English clubs. Today, West Ham have given me that opportunity and I didn’t hesitate to grab it.

He told the official website: “I’m looking forward to playing. It’s more than a month now that I’ve been training for this and right now I think I’d be ready to pull on the club colours.

“I’ve come here to continue as I was at Metz. I’m going to give it my all, going flat out on the pitch and I think the fans will appreciate that.”

2 comments on “Sakho’s a Hammer”