Soucek may be joined by former Slavia team-mate 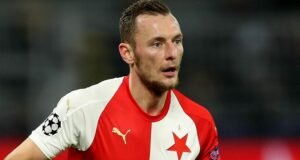 According to the Independent David Moyes is keen on the player who allegedly carries a £2-£4 million price tag and although that may seem too cheap let’s remember that Soucek came in at a very low £18 million for such a top player.

Coufal has had a couple of seasons at Slavia Prague and has thus won two successive league titles and is now consolidating his place in the international side as a result.

Moyes will clearly have received recommendations from Soucek on Couval sahead of making a possible move and  at the price it seems reasonable that could happen.

The Hammers now have a good relationship with the Czech league club as a result of the Soucek deal and that would ease negotiations despite there apparently also being interest from Southampton and Brighton.

Couval, 27, however, would have to be keen on joining his former team mate at the London Stadium where he could advance his international career by joining a Premier League club alongside a player who knows his game well.

CandH has already reported that Moyes is ready to clear out some defensive options with Ryan Fredericks very much on a potential exit list along with the club’s third longest serving player Aaron Cresswell.

Fabian Balbuena will also be on his way with the manager keen to bring in another top central defender as he concentrates on his regular agenda of getting it right at the back first.