The man behind the Rice contract negotiations 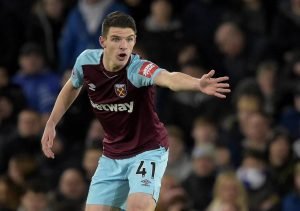 The football agent at the heart of negotiations for Declan Rice is Neil Fewings from the Wasserman Media Group.

The 19-year-old defender was previously managed by Playerworks but recently moved agents to Fewings.

In March 2017 WHUFC.com announced Rice had signed a new three-and-a-half-year deal with West Ham securing his services until 2020.

Claret and Hugh understand that the club have offered a new package £15,000 per week basic with appearance clauses that could take him to £30,000 a week in total.

Pellegrini will get the final say whether that offer will increase but for the time being there is no agreement.

4 comments on “The man behind the Rice contract negotiations”