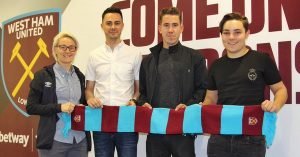 The Football Association has received 15 applications to join the revamped top two tiers of women’s football for 2018-19, with nine vacancies available. Up to four teams could join the top division, the FA Women’s Super League (WSL), and up to five may enter tier two, the new FA Women’s Championship.

Any club with an affiliated women’s or girls’ football team could apply before the deadline on Friday, 9 March. Successful applicants will not be named by the FA until the end of May.

West Ham is one of the clubs to make such an application. Sides wishing to play in the top league will have to meet new professional criteria, including running a youth academy. There will be a maximum of 14 teams in the WSL next season, but the final number may be fewer than that.

The applications will be assessed by an expert panel and the FA’s Women’s Board.

← Hammer caught up in Lyon fake interest claims
Poll: Should West Ham fans call a truce with the board? →
Click Here for Comments >