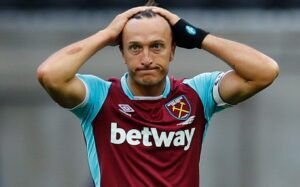 West Ham captain Mark Noble representing West Ham players this morning will be told at a Premier League Project Restart briefing on Wednesday to turn their faces away after they have been tackled, according to reports.

Top-flight captains will hold a video conference call with league bosses, the PFA and Government officials at 10 am on Wednesday as part of crucial Project Restart talks centred on player welfare.

And according to The Telegraph, the reported measure regarding tackling from the Premier League will come as part of significant ‘cultural changes’ that have to be accepted if football is to be played again before the end of the year.

Research carried out by experts at Aarhus University and the University of Southern Denmark showed that top-level football players are within an infectious distance of each other for an average of only 88 seconds during a match.

Football players through their captains will be able to voice their concerns over safety at this morning’s meeting.