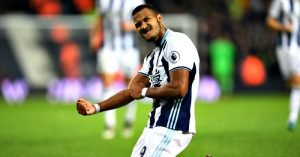 West Ham is said to be interested in a couple of players from West Bromwich Albion when they inviable relegation is confirmed. The Midlands club relegation is set to start a scramble of Premier League clubs keen to take advantage of relegation clauses and a high wage bill which will force a fire sale.

Salomon Rondon can leave West Bromwich Albion for £16.5 million this summer, when the club’s likely relegation to the Championship is confirmed. Rondon, the Venezuelan international forward has a release clause in his £70,000-a-week contract. Rondon was signed from Zenit St-Petersburg for a then club-record of £12m in August 2015.

← Hammers linked with interest in Leeds defender
Report: Moyes to pounce on his former midfielder →
Click Here for Comments >