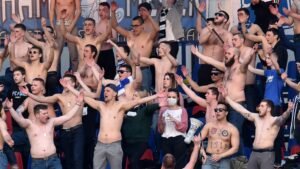 ClaretandHugh reported earlier that the Premier League’s season may be completed in Belarus where the Government is still allowing no social distancing or anything else.

Indeed they are carrying on as though coronavirus was no sort of an issue at all and that all stadia remained open in the country which has a population of 9.5 million.

That is all true!

Our story claimed that Premier League players could be airlifted to the Eastern European by the British Airforce in specially adapted transport planes with a full complement of backroom coaching staff.

Players would be required to wash their hands with vodka, take regular saunas and drive tractors to and from training sessions in an effort to reduce risks.

Games from Belarus would be broadcast back to UK Live as there are no flights taking off from the UK but local Belarus supporters would be allowed to watch to add atmosphere.

We would like to point out that today’s date is April 1 .