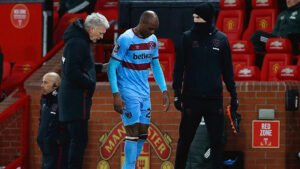 Angelo Ogbonna and Arthur Masuaku have been given just 50/50 chances of making it into the squad for the clash with Everton at the London Stadium on Sunday.

Oggy is believed to still be recovering from a knock against Chelsea whilst Arthur Masuaku is in much the same position after surgery.

Declan is understood to be ready for the match but the general feeling among those we speak with is that the manager will be very tempted to stay with the team which produced such a dramatic and entertaining display at Turf moor on Monday evening with the defensive midfielder on the bench.

Mark Noble will remain unavailable and we understand that Andriy Yarmolenko – whilst training on grass still isn’t fully recovered from injury.

However, there were no new injuries from the Burnley match in a game which provided probably the most entertaining of the season.

Oggy will probably be the most important absentee should he not bne available given the indifferent recent form of Issa Diop.