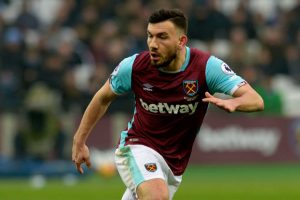 West Ham have received no offers at this stage for Robert Snodgrass despite rumours that Cardiff City boss Neil Warnock is interested in signing the midfielder.

At this stage the Scot will be on his way back to the London Stadium after a highly successful loan spell with defeated Championship play off finalists Aston Villa.

The Hammers had hoped they would be in a win/win situation by picking up a £1 million windfall via Villa landing in the Premier League and receiving a substantial bid for the player.

Instead they are now back to square one with Manuel Pellegrini having to decide on his future – presumably adter taking a look at him in pre-season.

There had been hopes that Warnock would move in with a bid for the newly promoted Wales club but London Stadium sources have revealed to CandH that is not the case.

We were told that there has been no bid or enquiry at this stage and that no decisions on anybody’s future would be made until the manager returned from Chile.

2 comments on “Hammers knock back speculation on player sale”