How we rated the Irons at Everton 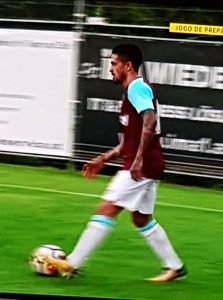 Niall McDonald hands out the marks
Hart: Will forever feature in replays of Rooney’s wonder goal sailing over him into the net 3
Zabaleta: Very static, prevents any attack being launched down the right. Booked, again 2
Reid: Looked stretched at times. Limped off with a hamstring strain on 75 mins 4
Ogbonna: Most touches in first half – mainly sideways to Reid and Cresswell. Saw less of the ball after the break 5
Cresswell: Rattled the bar during our best spell of the match 5
Obiang: Hooked at half time after a very poor display, defensively and creatively 3
Kouyate: Didn’t track Rooney for the second goal. Walked around for most of the 2nd half 4
Lanzini: Pickford had done his homework on penalty placement and the game was gone at that moment. Dropped very deep to pick up the ball but tried for 90 minutes 6
Arnautovic: Participated in short bursts. Made way for Antonio not a moment too soon 4
Masuaku: A decent outlet down the left 5
Ayew: No surprise to see he didn’t affect the game at all 3

Subs
Sakho: Being left out says much for his standing in the Moyes regime. Being forced in at half time said much for the first half display! Won the penalty 4
Antonio: Couple of driving runs. Interfered with Rice for the 4th 4
Rice: Given 13 mins at the back to prepare for Aguero and co on Sunday 4

8 comments on “How we rated the Irons at Everton”