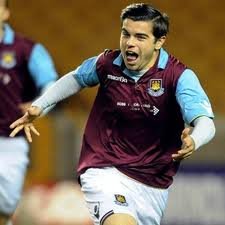 That brought the youngster’s tally to nine in preseason and will start a new round of calls for his first team inclusion.

With the first team so desperately short on firepower, manager Sam Allardyce is having pressure piled on him by Lee to be given his chance.

And the fans are bound to take up his case after seeing the Irons struggle in every game for goals..

The Hammers were two-up by the 18th minute. Lee’s first came as he pounced on goalkeeper Aaron Howe’s fumble to crash home.

Four minutes later it was two as Matthias Fanimo fed Blair Turgott, who crossed for Lee to finish again.

And he sealed his hat-trick with 60 seconds remaining when he picked up possession in to run on and score.

← Noble makes it clear “No repeats”
Cottee: “Difficult season if we don’t play two up” →
Click Here for Comments >

One comment on “Lee hat-trick piles pressure on Sam”