Manuel Pellegrini could try to sign Manchester City youngster Phil Foden on loan for West Ham, according to reports. 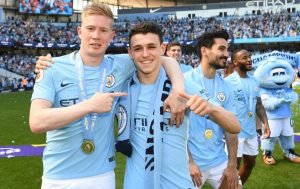 The Daily Mirror amongst others claims the Chilean could be interested in the possibility of bringing the teenager in on loan. Foden made 5 Premier League appearances totalling 45 minutes for Pep Guardiola’s side over the course of the season.

Phil Foden came on for Ilkay Gundogan in the 82nd minute of the final game of the season against Southampton to make his fifth appearance of the season, reaching the number required to be guaranteed a Premier League winner’s medal.

Phil Foden, who was 17 years and 350 days old at the time, is now the youngest player to win the Premier League, breaking the record set by Gael Clichy at Arsenal.

The medal caps off a successful season for the 17 year-old. It started when Foden led England’s Under-17 side to World Cup success in India, scoring twice in the final against Spain, and winning the tournament’s golden ball award in the process. But this summer could be just as important for Phil Foden.

5 comments on “Pellegrini could move for Manchester City starlet”