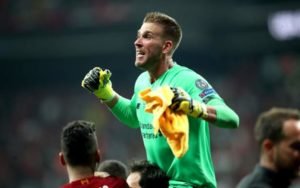 Adrian has finally explained the real reason behind his West Ham departure!

The Spanish stopper moved on to Liverpool after finding himself totally sidelined by Lukasz Fabianski in a reshaped Hammers squad.

Hindsight is one of those things that can thoroughly get on one’s nerves as we can all be experts on what may or may not have happened had he stayed.

But the decision was his alone given the form of the Pole in his amazing first season.

There were those of course who at the time reckoned Fab would be not be a great signing but has turned out to be one of the best in years – hindsight eh?

There were few who at the time blamed Adrian for leaving  and although he admits to “having butterflies” decided to leave despite there being a new contract on the table.

He quickly had the chance to impress under Jurgen Klopp when deputising for injures Alisson Becker at the start of the season.

And the 33 year old stopper revealed to BBC Sport: “I’d made a drastic decision not to stay any longer at West Ham, despite having a three-year contract offer on the table.

“I hadn’t played a single game all season in the Premier League. I didn’t feel valued economically either, to be honest. It was tough for me.

“Summer came and then I felt those butterflies in my stomach. I knew something good was coming. I was already aware of Liverpool’s interest before I received the first offers.

“They called me at the end of July. They said that they’d sell [Simon] Mignolet if I gave the deal the green light. That’s how it happened.”

One comment on “Real reason why Hammer left the club revealed”