Report: Eze has a dream move in mind 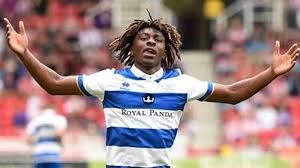 Eberechi Eze is being reported this morning as wanting to return to the club  which he grew up supporting -Arsenal.
Sky Sports reporter Kaveh Solhekol, clearly putting two and two together reckons the Gooners would be the dream move for the  Queens Park Rangers playmaker
Allnigeriasoccer.com also claims the player – of Nigerian descent – along with  Bright Osayi-Samuel were scouted by Arsenal in the recently concluded season.
Neither suggestion however will carry a lot of weight for supporting a club and being scouted by it mean very little in the great scheme of things.
Top clubs scout players all the time without it necessarily mean that a bid is going to follow so this seems to be a bit of a slow summer window filler story.
Crystal Palace are the only club to have made a firm offer but have made it clear that will not be going to the £20 million required by Rangers and whilst the Hammers boss David Moyes is keen, it looks certain he will keep his powder dry until later on in the window.
Eze was Queens Park Rangers Player of the Year scoring 14 goals and setting up eight others in 46 starts in the Championship.
Permalink

6 comments on “Report: Eze has a dream move in mind”