Posted by Sean Whetstone on May 17, 2020 in Videos, Whispers 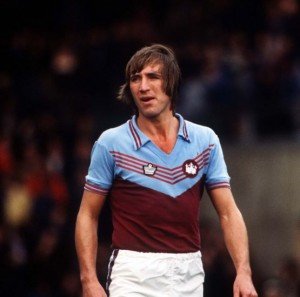 The West Ham Billy Bonds story told mostly in his own words.

This retro VHS tape of over two hours has been converted and uploaded to YouTube by Hammers supporter Rob Banks.

Bonds’ legendary association with West Ham saw him play 799 times in Claret and Blue and lift the FA Cup twice as captain, in 1975 and 1980.

He made his first appearance for West Ham in a testimonial match for Ken Brown in the same month and made his League debut against Sheffield Wednesday in the opening game of the 1967–68 season. He was ever-present in the 1968–69 and 1969–70 seasons and played 124 consecutive league games until injury ended his run of appearances in October 1970. Bonds played his first three seasons as a right-back before Greenwood switched him to midfield in the 1970–71 season where he counterbalanced the skills of Trevor Brooking. Bonds was at his peak in the early 1970s, helping West Ham to the semi-final of the Football League Cup in the 1971–72 season, where they lost to Stoke City after a second replay, and topping the scorers list at West Ham in the 1973–74 season with 13 goals, including a hat-trick against Chelsea. After the departure of Bobby Moore in March 1974, Bonds was appointed to the captaincy and led the club to an FA Cup final victory over Fulham in 1975 and to the final of the 1976 European Cup Winners’ Cup despite a groin injury that interrupted the latter half of the 1974–75 season and part of the 1975–76 season. Greenwood moved Bonds from midfield to the back four as centre-half alongside Tommy Taylor shortly before the end of the 1976–77 season, where he was able to come out from defence with the ball.

He experienced relegation with West Ham at the end of the 1977–78 season but led West Ham to a second FA Cup victory over First Division club Arsenal in 1980, becoming the only West Ham captain to lift the FA Cup on two occasions. In 1980–81, he led West Ham to the final of the League Cup, which was lost to Liverpool after a replay, and to promotion back to the First Division.

Bonds passed Bobby Moore’s club record of appearances in 1982–83 and ‘officially’ retired in May 1984, relinquishing the captaincy to Alvin Martin. A spate of injuries to first-team players saw him return to the squad and make 26 league and cup appearances in 1984–85. He missed the entire 1985–86 season due to a toe injury but, having passed his 40th birthday, he was able to re-establish himself in the first-team during the 1986–87 season. A knee injury that forced him out of the last two games of the 1987–88 season led to a decision to finally retire in the summer of 1988, having played his last game at Southampton in April 1988 at the age of 41 years and 226 days.