Watch out Irons …Pulis is about 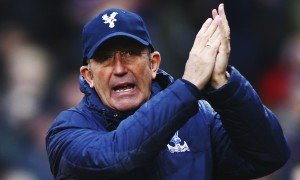 New West Brom manager Tont Pulis’ presence in the West Ham stands this afternoon is set to make the Irons job against the west midlands outfit harder than it might have been.

Pulis admitted to ClaretandHugh in an exclusive interview last night that he hopes that’s the case declaring: “It should be the way when a new man arrives.

“The Hammers have done brilliantly this season and Sam has done a terrific job  – they are a real test for any team. It’s going to be very hard for us.

“I have had nothing to do with the preparation for the team for this match but I would hope and expect  my presence in the stands will make a difference!”

Meanwhile Baggies star James Morrison has indicated the squad members are playing for their futures saying: “It’s a fresh start and whoever comes in might have their eyes on the game.  You’ve got to impress the new head coach to get in the team.

5 comments on “Watch out Irons …Pulis is about”