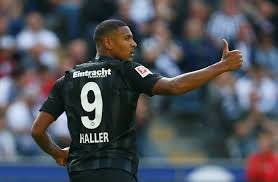 Frankfurt has officially confirmed they have reached an agreement with West Ham and the player will now undergo a medical.

On Frankfurts official English Twitter account the German club said “Eintracht and West Ham have agreed terms for the transfer of Seb Haller. Haller has now been cleared to undergo a medical in London. If all goes to plan then Haller will sign with the Hammers” 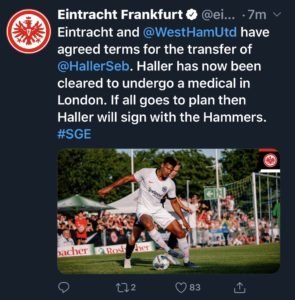 As Claret and Hugh revealed earlier the deal will cost the Hammers 45 million Euros (£40.5m) plus 5 million Euros (£4.5m) of add-ons likely to be on a five-year contract making him West Ham’s new record signing surpassing the £35m paid for Felipe Anderson last summer.

The 25 year old scored 20 goals and made 12 assists last season for Frankfurt with 33 goals in 77 appearances since joining from Utrecht two years ago. These stats make him arguably a better signing than Maxi Gomez who turned down the Hammers for Valencia last week.