West Ham squad arrive back in the UK 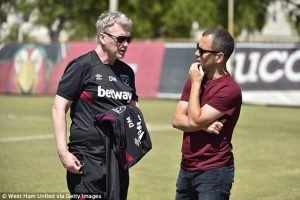 The West Ham first-team squad arrived back in the UK from Florida in the early hours of this morning after completing five days of warm-weather training in Miami. The players who have been enjoying temperatures in the US as high 30c arrived back to a sub-zero climate and a flurry of snow.

They were staying at the luxury Fontainebleau Miami beach hotel right on the seafront and training at Barry University on Miami Shores. Pictures of them relaxing and sunbathing on the beach became back page headlines in the papers earlier this week but the club insists the players were only given a few hours off and the trip was not a holiday and very much a working time for the squad.

One comment on “West Ham squad arrive back in the UK”