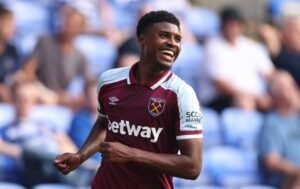 The Hammers have continued their great form from the second half of last season and are showing no signs of slowing down.

But with games coming thick and fast over four competitions and the January transfer window approaching, David Moyes must be thinking about bringing in reinforcements.

Participation in this year’s Europa League complicates our efforts to finish in the top four of course.

Thankfully though, should the Hammers top the group which means we get a rest from the competition until  March.

The cup competitions also pose a threat to West Ham’s bid to qualify for the Champions League, with December’s EFL cup quarter final against Spurs falling right in the middle of the busy Christmas period.

This year sees the return of the two-legged semi-finals in this competition, so the Hammers will have another two fixtures to play in January, if they beat Tottenham.

Players at all PL clubs felt the toll of last season’s fixture congestion due to the condensed league, and although we will see a return of the winter break this season, matches will resume at a time when the Irons expect to be without Said Benrahma due to Algeria’s participation in the African Cup of Nations.

Injuries are the big worry. At the  back, the goalkeeper position is well covered.

The emergence of Ben Johnson at right back has provided terrific cover and competition and cover for Vladimir Coufal, but the same cannot be said on the other side where  cover for Aaron Cresswell is long overdue..

The recent injury to Angelo Ogbonna means that a left-footed centre back signing should also be near the top of the list.

In midfield, the Hammers can call on three experienced performers in Declan Rice, Tomas Soucek and Mark Noble for the two deep-lying spots in their 4-2-3-1 formation.

We’ve yet to see what summer loan signing Alex Kral can do, but from a purely numerical perspective four players for two spots seems logical.

Further forward in the number 10 position, Pablo Fornals has started to show some of the quality that convinced the club  to sign him in 2019. Then there is Manuel Lanzini. His undeniable quality means that extra cover in this position is not an urgent concern.

Another attacker is the priority with the club a Michail Antonio injury away from a crisis, a point made by Irons legend Trevor Brooking in a recent interview.

Although the Hammers are far from a one-man team, Antonio is the club’s only recognised centre forward. At 31, with a history of soft tissue injuries, his minutes already need careful management, so it’s vital the club bring another striker in.

If West Ham are to fulfil their potential this season, the club must address these gaps in the squad in the January transfer window, if not, they could be left thinking “what if…?” come the end of the season.