Zaha gets off scot-free

Posted by Sean Whetstone on October 8, 2019 in News 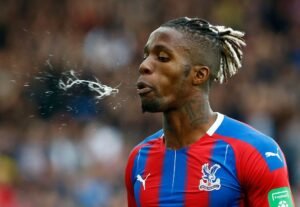 Over 74% of Claret and Hugh readers believe Wilfred Zaha intentionally spat in the direction of Declan Rice.

The 26-year-old took to social media on Sunday to deny claims from West Ham fans after a video of his spitting went viral before quickly deleting his defence video when a second video emerged.

Only 26% of those polled believed the Palace player’s story that he was spitting towards the home crowd his right and not at Rice. The incident was not included in the match official’s report so can not be investigated by the FA for any retrospective punishment.

Zaha took to social media again yesterday to deny a Daily Mail article that he is taking legal action against his agent, Will Salthouse of Unique Sports Management, due to anger at the agency’s failure to secure him a transfer from Crystal Palace last summer.  The winger signed a new 5 years contract with Palace last year worth £130,000 per week.