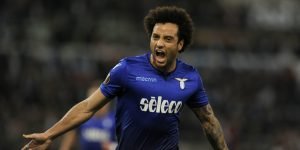 West Ham continue to negotiate with Lazio over Felipe Anderson’s possible switch to the London Stadium with the player’s personal terms unlikely to be a problem.

We understand that the right sided midfielder – currently earning around £48k a week in Serie A – is looking for £80k which is well within the Hammers budget without affecting the Financial Fair Play regulations.

A figure of £60k was reported in the Italian media but we have learned that £80,000 is the reality.

Meanwhile, the two clubs are still trying to agree a fee for the player but rumours Chelsea are also interested  are not accurate and may have been brought into play by Lazio in the hope of forcing up the price.

The Hammers have made an offer of £26.5 million plus £7 million in extras with the player keen to make the move into the Premier League.

Should it happen it will be interesting to see the destiny of Michael Antonio on whom Palace are still being reported as holding an interest.